I first came across Hannah Witton on YouTube some years ago, 2012/13 I think. I subscribed and watched occasionally, and thought her Hormone Diaries was such a great idea. While, I confess, I haven’t followed it as avidly as I wish I had, the beginning of it was remarkably similar to my own hormone experience, in fact I must go back and continue watching to see just how similar it has been. 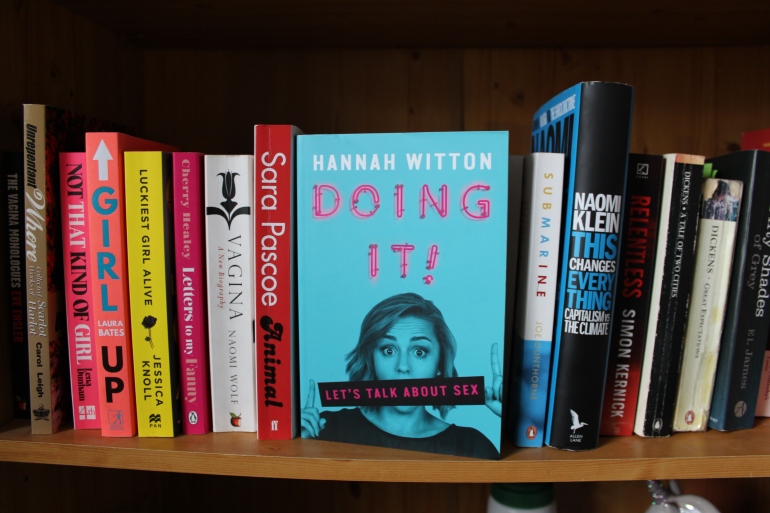 A week or two ago I was reading Animal (brilliant, highly recommend) by comedian Sara Pascoe when I saw Witton tweet out a video of hers featuring Animal  in the thumbnail. I watched and was fascinated to find that our sex related bookshelves were quite similar. This particular video was part of the promo for Witton’s debut book Doing It – I had no idea she was writing a book! The book was out at the end of the week so I preordered it.

An Adolescent’s Guide to Sex and Sexuality

For the most part it is all written by Witton, but there are many contributive essays by guest writers. I think my favourite thing about the entire book is her repeat insistence on readers to ‘check your privilege’. It is such an important message, and Witton explains it so clearly yet eloquently that there’s no doubt about what she means. She uses her privilege to promote the voices of others, as the guest writers discuss very personal issues from situation specific perspectives. While in Doing It this is specific to LGBTQ+ and other sex specific scenarios, the mantra of ‘check your privilege’ is brilliant.

What stands out for me with Doing It is how sex positive it is. The book deals with everything one expects from a ‘let’s talk about sex’ genre of book; STIs, consent, contraceptives and the nitty gritty biology, but unlike other books of its kind it also talks about how good sex can be. Rather than just the ‘don’t have sex, you will die’ narrative young people have drilled into them (pardon the pun) Witton instead proposes: sex is great, fun and exciting, don’t do these things, try out these other things, off you go and enjoy yourself on your own or with another consenting individual(s).

It’s not patronising either, which is nice. It explains almost everything in a readable and simple tone, yet in places, such as consent and sexting, it explains the exact details of the law, so everyone can understand where the legal, not just moral, lines are – fab!

There could be more said about everything in the book (Hannah, if you write another, hit me up for a little more about menstruation?) but for the most part it’s a pretty extensive handbook on sexuality, for everyone. Plus, if there had been more detail there would have been less room for Witton’s cracking anecdotes, and no one wants that.

I can’t say I learnt a whole lot of new information, but I wish I could have read something like Doing It when I was 15/16/17. I live in some sort of weird student bubble where I don’t seem to know anyone between the ages of 1 and 18, but if I knew a teenager I would definitely give them this book.

The beauty of books like Doing It and Pascoe’s Animal is that they are brutally honest, inspiringly detailed but, most importantly, accessible. They cut the crap of scientific and legal jargon and make sexuality understandable.

Witton talks about hoping one day being able to contribute to a national curriculum for sex-ed (same, Hannah). I can’t help feeling that if Doing It became compulsory reading for all year 9s in the UK, we would see a generation develop with a far healthier attitude to their own bodies, the bodies of their peers and lovers, and a generally healthier attitude towards sex.

P.S. bravo to both Witton and Pascoe for their sketches of human anatomy *leads round of applause*.

3 thoughts on “Witton educates on sex without vilifying it – Review: Doing It”

Pathetic but significant milestone reached in my flat in April 2022: using all four of my dining chairs at the same time. Very luck to have been spoiled with lots of lovely visitors last month. 💛 Although it all looks rather boozy from these pictures, which I’m sure it wasn’t… #wheninBelgium 🍻🇧🇪 #postpandemicmilestones
Very disappointed that the coincidental timing of starting the Paris and Brussels chapters of #Afropean as my train pulled into each respective city didn’t happen to continue for the rest of Johny Pitts’ tour of Black Europe #CitybytheBook
🌞 ‘Happiness is not a potato.’ 🥔 #Villette, set in an imaginary city and country inspired by Brussels and Belgium, worked its magic to reconcile my relationship with Charlotte Brontë at looong last ✨🇧🇪 #happinessisnotapotato #citybythebook
Is it possible to be vicariously hungover from being kept awake by your neighbours partying all night? Either way, it called for a Saturday morning on the sofa finishing off @howtoglitteraturd’s beautiful book ✨ #youreavicioustrollop
🏴󠁧󠁢󠁳󠁣󠁴󠁿 Part 2! 🏔 A *brisk* start to 2022, with a trip to Aviemore for a winter walking skills course with @cairngormadventureguides. Bagged my first Munro, in winter no less, with the help of some crampons and ice axe work! The world feels a lot less covidy in the mountains, a nice feeling to start 2022 with (even if it’s a massive false sense of security 😩).
🏴󠁧󠁢󠁳󠁣󠁴󠁿 Part 1! It wasn’t the Hogmonay I had planned with @fayevlietstra (💔) but still glad I managed to squeeze in a few Edinburgh (and Harry Potter) landmarks en route to the Highlands. Accompanied by this very appropriate Helen MacInnes book a friend bought me especially for this trip! 😍 I’ll be back!